Scribendi.com Vice-President Nominated as One of Canada's Top 25 Immigrants 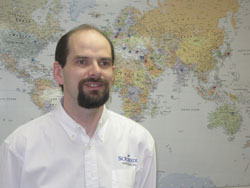 Scribendi.com's Terence Johnson
has been nominated as one of Canada's Top 25
Immigrants. Help us show Canada that
Chatham-Kent is a great place to do business.

The vice-president of Scribendi.com,Terence Johnson, has been shortlisted for the Top 25 Canadian Immigrants of 2011 Award. It's a people's choice award that recognizes newcomers to Canada who have made a positive difference, either locally or nationally.

"I’d like to thank the Chatham-Kent community for supporting my efforts to blaze a trail for other entrepreneurs to follow," said Terence Johnson. "With unemployment running high in Southwestern Ontario, it takes vision and courage to embrace newcomers as part of the solution, working alongside local entrepreneurs to create new jobs and opportunities."

Showcasing entrepreneurial talent or personal achievement helps to inspire other newcomers to Canada and provides them with positive examples of the great things that can be accomplished in this country, particularly in Chatham-Kent, he added.

"Anyone wondering where best to live and to start a business in Canada should give Chatham-Kent serious consideration," urges Johnson.

Voting begins on February 18, 2011, and any person living in Canada can vote; one vote per email address only.

Click here to vote. Find Johnson’s profile by using the arrow keys under the portraits to move through the list alphabetically.

Scribendi.com is proud to announce that we have been awarded ISO 9001:2008 Certification from the International Organization for Standardization.

The Web Marketing Association announced that Scribendi.com has been awarded the Small Business Standard of Excellence WebAward for Outstanding Achievement in Web Development.

Scribendi.com wins an International Business Award for Best Writing/Content and earned a Distinguished Honoree medal for IT Executive of the Year.

Scribendi.com president, Chandra Clarke, announced today that Terence Johnson, MA (Oxon), would be joining the company as a full partner, taking the position of Vice-President. This appointment comes as our company begins to expand operations and strengthen management support.