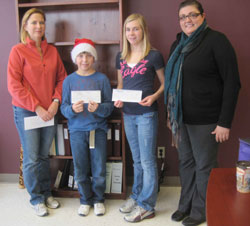 Scribendi.com donated funds to Indian Creek
Road Public School's "Buy Out For Brad,"
which raised $857.41 for Sgt. Brad McFadden,
who was injured on his third tour of duty
in Afghanistan.

Scribendi.com recently donated funds to a local elementary school raising money for Sgt. Brad McFadden. Indian Creek Road Public School students made Christmas cards and raised funds to help support former student McFadden, who is recovering in a hospital in Germany after being critically injured by an improvised explosive device in Afghanistan.

"The students at Indian Creek Road Public School have done a fantastic job of fundraising for Sgt. Brad McFadden, and we are proud to contribute," said Vice-President Terence Johnson. "Our world is totally connected. A crisis anywhere reaches us here, and peace restored anywhere touches us here too. Before his three tours of duty in Afghanistan, Sgt. McFadden served in the former Yugoslavia. Without the dedication of the men and women of the Canadian Armed Forces to bringing stability to that region, the relationships we have there now might not have been possible. One day, we'll be able to say the same about central Asia."

Students participated in a fundraiser called "Buy Out For Brad" in which they donated money for the chance to skip class for an afternoon to watch Christmas movies. With Scribendi.com's contribution, $857.41 was raised.

"We are so thrilled by the generosity of the community and Scribendi’s contribution," said Laurie Welch, principal at Indian Creek Road Public School. "Christmas is the time for giving after all."

School Prime Minister Sam Wilcox was proud of the contributions made by students and staff alike: "It was for a good cause."

Scribendi.com President Selected As a Judge at Business for the Arts Event

Scribendi.com President, Chandra Clarke, was selected as a judge for the 60 Second Sponsorship Pitch component of a two-day workshop organized by Business for the Arts (BftA).