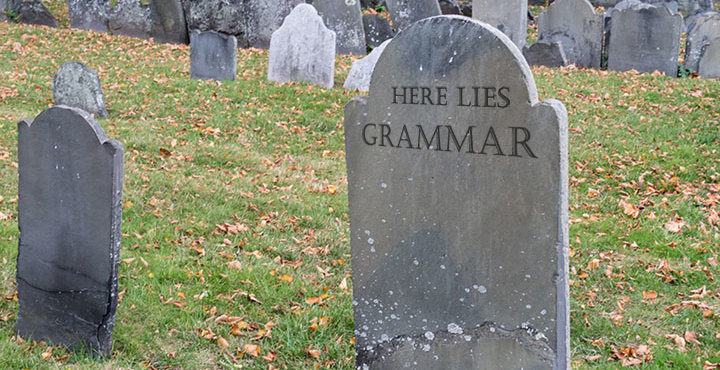 In a previous article, I went on a satisfying rant about people who like to "correct" others on grammar mistakes they aren't actually making. It felt good to vent about all those bad EGGs—you know, English Grammar Geeks—getting their jollies from correcting errors that aren't actually errors.

Establishing which highly regarded "rules" aren't actually rules at all was relatively easy. Just a few Google searches and one cup of coffee after starting my EGG-cracking mission, I had already found a solid list of false grammar "mistakes" to write about. Today's topic, however, isn't so easy to pin down. Because while grammar rules and non-rules are by their very nature unambiguous and easy to explain, the gray area that exists between the rules is . . . well . . . grayer.

The thing is, not all grammar rules are as black and white as we'd like to believe. But wait, cry prescriptivists everywhere, without rules, where do we draw the lines? And then, without lines, how long before we slide into grammarless language anarchy? To the hard-core proponents of written perfection, the fear of an impending grammar apocalypse lurks behind every not-quite-perfect sentence.

Many blame the Internet for what they regard as damaging changes to English-language usage. For grammar traditionalists, the Internet is to the English language what zombies are to the apocalypse—they both signify the beginning of the end, an irreversible change in the fabric of literacy and life. But is the quality of the English language really declining? Is the gray area of grammar a problem to be solved, or is it just an inevitable aspect of an evolving language? To really understand why people think the end of English grammar is nigh, there are couple of concepts we need to discuss: namely, prescriptivism and descriptivism.

Linguistic Prescriptivism in a Nutshell

What do your grandmother, strict Mrs. Sharp from seventh-grade English, and Strunk and White have in common? They could all likely be classified as language prescriptivists. Prescriptivism (or prescription) is a complex subject, but the basic thing you need to understand about it is this: the goal of prescriptivism is to establish and enforce the use of a standard form of language, one with definitive, unambiguous rules. The authority of language "experts" and their work is paramount to the idea of linguistic prescriptivism.

You know what they say: "Rules is rules, kid." (Well, in this case, they don't actually say that—they shudder at the lack of subject–verb agreement and then go sit in a dark room for a while to recover.)

In short, prescriptivists focus on how language should be used, while descriptivists focus on how it is used. Any practical person can see that both approaches are necessary for a well-rounded understanding of language, but that doesn't stop nerds everywhere from arguing incessantly about which approach is superior. Personally, I think about it like this: peanut butter is great, jelly is great, but if you use only one of them, you're missing an important part of the sandwich.

What the Grammar Experts Say

Grammar experts tend to agree that a balance between the two major approaches is necessary. They also concede that a grammar "gray area" does, in fact, exist; while there may be rules for everything, not all of those rules are perfectly clear-cut. This is probably because, whether we like it or not, our language is constantly evolving. Think of the gray area of English grammar as the intermediary of our language's evolution. For every person who has gone ahead and started using the singular they, there's a giant group of grumpy grammar nerds with their arms tightly crossed, refusing to accept the change.

And even though they'll agree that grammar has some ambiguities, linguists tend to be foremost amongst those arm-crossers. According to a recent article in Science, syntacticians—linguists who specialize in syntax—do acknowledge the existence of a gray area when it comes to grammar rules. However, they themselves tend not to deviate from what are regarded as the "official" rules. One study found that only six percent of sentences written by linguists themselves fell into the gray area, meaning that the other 94% were classified as being either completely right or completely wrong. It seems that no matter what they say to the contrary, English-language experts aren't willing to bend the tried-and-true rules of English grammar.

What Does This Mean for You?

If language experts aren't hopping on board the Grammar Evolution Train, what does that mean for the rest of us? Do changes to our language mark some sort of decline, or are the voices of the English-speaking population simply outnumbering and overpowering those of the experts?

Language is undoubtedly changing, but that's what language does. The Internet may be having an unprecedented effect on language, but that doesn't mean that the end of proper English is imminent. The truth is, there has never been a time in history that English has stopped changing. Even documents written just 100 years ago seem to follow drastically different punctuation and grammar rules than you'll see today. The further back you go, the less recognizable the grammar conventions are likely to seem. (For a closer look at this evolution, I challenge you to read Beowulf, The Canterbury Tales, and The Tempest in sequence. Some might call this a tedious task, but I call it a great weekend plan.) Just as cultures and societies evolve, so too does the language of these communities.

Still, navigating the ever-changing waters of English grammar rules can be tricky. How do you know when to wade through the gray area and when to stick to what you know is correct? Embracing change means being a part of that change, but how can you do this without compromising the quality of your work?

Generally, in academic writing you should stick to traditional grammar rules. While fiction and other creative types of prose offer a bit more flexibility, it's still very easy to make mistakes if you're not sure what is acceptable and what is not. It's great to have an open mind about expressing yourself in different ways, but without experience to back you up, it can be difficult to know where the boundaries are. Maybe a character in your novel uses a lot of slang in his speech—how do you write this without compromising the quality of the narrative? Or perhaps a chapter of that same novel is purposefully fragmented to represent the chaos of the events. Can you actually write in fragments, or is there another way to convey this mood to the reader? This is where a professional editor comes in mighty handy. An editor can help you with more than just grammatical correctness; instead of finding a good way to say something, an editor can help you find the best way to say something.

Learning and understanding grammar rules can be challenging, especially when the rules keep changing. When you're feeling frustrated with ambiguous rules, remember how important change is. Without change, we might still be wearing parachute pants, or competing for the tallest beehive hair, or traveling by horse and buggy. Progress, as confusing as it may be at times, does have its advantages.

It is never fun when someone corrects your common grammar mistakes, but it is even worse when you were actually right all along.

When to Spell Out Numbers in Writing (Guide + Examples)