Scribendi.com Braves the Rain to Participate in the Muddy River Run

Scribendi.com participated in the third annual Muddy River Run in support of VON in Chatham-Kent 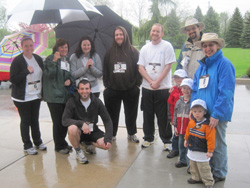 In-house staff joined Scribendi.com President Chandra Clarke and Vice-President Terry Johnson on Sunday, May 15, 2011, in the Muddy River Run to raise funds for the Chatham-Kent VON. Staff braved the cold, wet conditions to participate in the third annual event hosted by VON to promote a healthier community. The Muddy River Run included a 10K and 5K competitive run, a walk or urban Pole, and a 5K Fun Run.

"In spite of the weather, we had an absolute blast doing this," said Clarke, who was joined by her three young children and husband. "It is important for us, as employers, to encourage our employees to be personally active for their own well-being, and to be active in the community. We hope to see more people out next year!"

One of Scribendi.com's in-house editors, Neil Wood, took a break from editing and proofreading to run on Sunday: "The Muddy River Run was nothing short of amazing and Team Comma Splice and Team Grammar Hammers' performance was inspiring!"

Scribendi.com collected more than 60 shirts from staff in a t-shirt drive that took place at company headquarters throughout the month of May.

During the month of November, Scribendi.com will be participating in a global initiative known as Movember. Movember encourages men to grow a moustache for the entire month of November in order to raise awareness of, and funds for, the fight against prostate cancer.