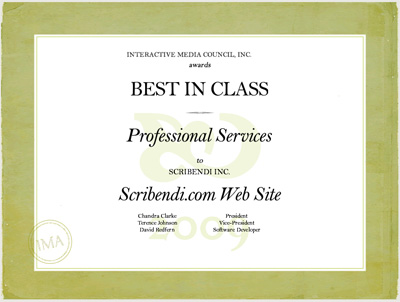 Our company has been awarded Best in Class by the Interactive Media Awards™ (IMA) for our recently redesigned Scribendi.com website. The honor recognizes that our project met and surpassed the standards of excellence that comprise the web’s most professional work. Our site was specifically honored for excellence in Professional Services.

The judging consisted of various criteria, including design, usability, innovation in technical features, standards compliance, and content. In order to win this award, our site had to meet strict guidelines in each area—an achievement only a fraction of the sites in the IMA competition earn each quarter. The Best in Class award is the highest honor bestowed by the IMA.

About the Interactive Media Awards™

Scribendi.com has been recognized as one of Ontario's top exporters and an outstanding contributor to Ontario's economic growth.

The Web Marketing Association announced that Scribendi.com has been awarded the Small Business Standard of Excellence WebAward for Outstanding Achievement in Web Development.

Scribendi.com wins an International Business Award for Best Writing/Content and earned a Distinguished Honoree medal for IT Executive of the Year.