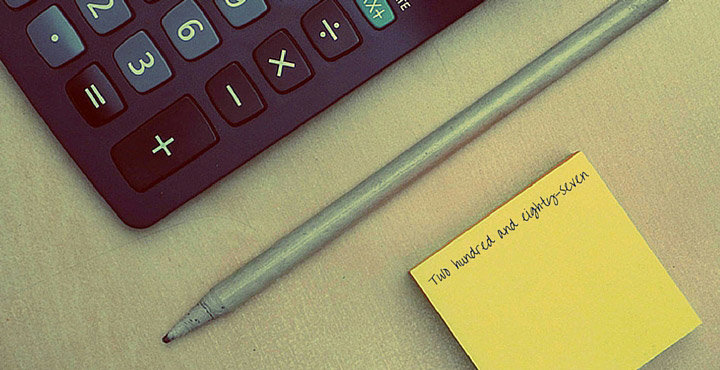 When to Spell Out Numbers in Writing (Guide + Examples)

You may have noticed a theme when it comes to the English language: most rules are not completely standardized. This (somewhat frustrating) fact is especially true when it comes to spelling out numbers. Should you write them out in words or leave them as numerals? To write numbers properly, you will have to identify potential differences between major style guides (such as MLA, APA, and Chicago, to name a few) because these guides often outline different rules for using numbers in writing.

To make it easier, let's use an example. Say you're working on a paper evaluating the importance of the local public library in your community. The document will make use of small numbers, large numbers, decades, and statistics. Thankfully, when using numbers in writing, you can count on a few conventions that apply to most situations; just be sure to consult your specific style guide if one has been assigned.

A simple rule for using numbers in writing is that small numbers ranging from one to ten (or one to nine, depending on the style guide) should generally be spelled out. Larger numbers (i.e., above ten) are written as numerals.

The reason for this is relatively intuitive. Writing out large numbers would not only waste space but could also be a major distraction to your readers.

Here is a rule that you can truly rely on: always spell out numbers when they begin a sentence, no matter how large or small they may be.

If the number is large and you want to avoid writing it all out, rearrange the sentence so that the number no longer comes first.

Revised: There were 15 new fiction novels on display.

Another important factor to consider is whether you are working with a whole number or a decimal. Decimals are always written as numerals for clarity and accuracy.

To revisit our library example, perhaps circulation statistics improved in 2015. If a number falls in the range of one to ten and is not a whole number, it should be written as a numeral.

Incorrect: The circulation of library materials increased by four point five percent in 2015.

Correct: The circulation of library materials increased by 4.5% in 2015.

When two numbers come next to each other in a sentence, be sure to spell out one of these numbers. The main purpose of this rule is to avoid confusing the reader.

Incorrect: There were 12 4-year-old children waiting for the librarian to begin story time.

Correct: There were twelve 4-year-old children waiting for the librarian to begin story time.

Correct: There were 12 four-year-old children waiting for the librarian to begin story time.

Decades or centuries are usually spelled out, especially if the writing is formal.

Incorrect: The library was built in the '50s.

Correct: The library was built in the fifties.

Always strive for consistency, even if it overrides a previous rule. For example, if your document uses numbers frequently, it is more appropriate for all numbers to remain as numerals to ensure that usage is uniform throughout. Similarly, if a single sentence combines small and large numbers, make sure that all the numbers are either spelled out or written as numerals.

Let's complicate things a bit, shall we?

If your work must follow the rules of a specific style guide, understand that they all have rules for spelling out numbers that may differ slightly from the rules listed above. For example, MLA style indicates that writers may spell out numbers if they are not used too frequently in the document and can be represented with one or two words (e.g., twenty-four, one hundred, three thousand). APA style advises that common fractions (e.g., two-thirds) be expressed as words. A number of specific rules for spelling out numbers are outlined in section 9.1 of the Chicago Manual of Style.

Your ultimate authority will always be a style guide, but in the absence of one, following the rules outlined above will help you be consistent in your use of numbers in writing.