Understanding how to use punctuation marks properly

Along with commas and semicolons, you'll find that apostrophes are handy indicators in your sentences. Apostrophes are used to show possession. Here is an example:

If you forget the apostrophe showing that Amy owns the menu, you'll end up with a plural instead of a possessive, like:

Remember, the apostrophe shows ownership, and without it, you'll often get a plural. (Your reader will wonder how you ended up with so many Amys!)

Set your information apart with brackets and parentheses

Amy had to make a last minute trip to the store for a few ingredients (milk, eggs, and sugar) before she could start cooking.

Brackets, also called square brackets, are used to enclose material that doesn’t belong to the surrounding text. This information is usually added by someone other than the original writer. They can also be used to highlight corrections, translations, and editorial insertions.

They [Claire and Danny] had a falling out several years ago.

Evince your omission with ellipses

If you omit a word, phrase, line, or more from a quoted passage, let your reader know this by using ellipsis points. When necessary, ellipsis points may be preceded or followed by other punctuation. In written dialogue, ellipses are also used to indicate an unfinished thought, a trailing off into silence, or a pause in speech.

Amy had to make a last minute trip…before she could start cooking.

When Danny walked in the door, Claire stared at him in disbelief before muttering, "What in the world…"

Compound your words with hyphens

Using hyphens properly is tricky, but don't be a hyphen hater. The simplest explanation of hyphens is that they join words. Hyphens can be used to join two (or more) words that serve as a single adjective before a noun (but not after). They are used for compound numbers and for prefixes such as ex-, self-, and all-.

Amy lived on a one-way street.

While they look similar, don't mistake hyphens for dashes. En and em dashes are longer than hyphens and serve different purposes. En dashes are about the length of the letter n and are used to indicate range (in place of the word "to"), to contrast values, or to highlight a relationship.

Amy figured the dinner party would be 3–4 hours long.

Amy really valued the mother–daughter relationship they had.

Em dashes are roughly the length of the letter m and are used to set off a parenthetical thought, an interjection, or any amplifying or explanatory element—similar to a comma, parentheses, or colon. Em dashes can be used in the middle or at the end of a sentence.

Amy felt a flush of pride when she served dinner—the chicken was perfect.

Amy was exhausted when everyone left—the party had gone much longer than planned—and went to bed without doing the dishes.

Show you're speaking with quotation marks 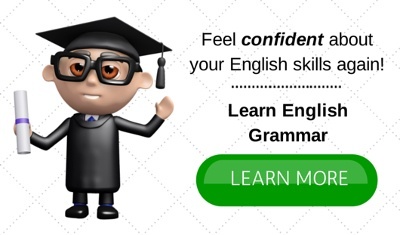 Quotation marks are often confusing to ESL writers unfamiliar with English grammar and punctuation rules. When to use double or single quotation marks is even trickier. However, there's no need to be embarrassed—these upside down commas sometimes confuse even the most seasoned English writers!