What you need to know about how to format a screenplay 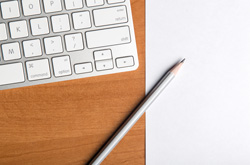 Scribendi.com provides tips on how to
make sure your screenplay format is correct.

You have your beautifully written screenplay that you know is going to appeal to all the right people. But right now it's in a state that only you can interpret. Using a proper screenplay format will help you communicate your best ideas in a standard, well-organized manner that will be recognizable to anyone in the industry who picks it up.

A description is a short paragraph that sets up the scene for the viewer or reader. It introduces the setting of a scene and provides a brief description of the character's appearance and initial actions. The description is almost always written in an active voice in the present tense. It is important that the actions described are actions that can be seen by the audience. Extraneous contextual details should be communicated by the character or eliminated. Descriptions begin on the left margin in conventional screenplay format.

GRANT leaves the apartment. He grabs an old worn coat from the hook and swings it over his shoulder.

GRANT leaves the apartment. He grabs his favorite old coat that his grandfather left him in his will in 1978 and swings it over his shoulder.

In proper screenplay format the dialogue is indented 2.5" from the left edge of the page, under the speaking character's name.

Character names are referenced in the screenplay in all capital letters when they are first introduced, and capitals are always used in dialogue headings. Further descriptions of what the character looks like or is doing use title case. Character cues are placed 4.2" from the left edge of the page.

CORA is riding a bike.

If a character has no dialogue, their name does not need to be in capitals.

Sounds heard by the audience are in all caps.

Sounds issued by individual characters are not in all caps.

Pffft. I'm not chasing you.

Extensions are placed inside parentheses and positioned to the right of the speaker's name to signify how the viewer hears the voice. There are two main types of extensions:

A description of how the character looks or talks in a specific instance is put, in parentheses, below their name in dialogue. These should be used sparingly, as the character's emotional state can generally be inferred from the text. Parentheticals indicate action, attitude, and vocal emphasis. Proper screenplay formatting can help an actor easily find these directions. These cues sit 3.0" from the left edge of the page

The guideline for regulation font in the film industry is 12-point Courier. Complying with an industry standard makes it easier to guess the length of time the film will take. Screenplay formatting conventions estimate one minute of screen time per page. Most film studios will not accept scripts longer than 120 pages.

Many of these screenplay formatting standards can be applied by an automated formatting program, but it is important to understand and comply with these standards when distributing your screenplay to potential buyers.

A cleanly formatted script deserves cleanly edited prose. The editors at Scribendi can help you fine-tune your manuscript. Our script editing services will make sure that your screenplay is polished, free of formatting mistakes, and ready to sell.