To Write, or Not to Write?

How to write a script they won't forget 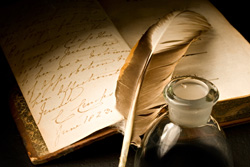 Scribendi.com teaches you how to write a
script by looking at elements of the most
famous English-language plays out there.

What qualities turn a script into a classic script? What do the works of, say, William Shakespeare, Oscar Wilde, and Tennessee Williams have in common? Although each of these playwrights is famous for his own unique style and talents, their scripts also share some important qualities. Here is some advice about how to approach the core elements of a script in ways that will make it memorable.

Complex, but not too complicated. Likeable, but not perfect. When it comes to creating characters, balance is key. Let's look at Shakespeare's Prince of Denmark. Would Hamlet be a likeable character without his guilt and inner conflict? Whether it's seeing the ghosts of their fathers and contemplating suicide or something altogether different, your characters should each have their own personal motivations and flaws. Before you can know where each character belongs in the story of your script, you need to decide who they are and how they got to be where they are. Write out a character sketch (which includes a brief history for each major character), just for yourself. The backstory of each character doesn't need to be included when you write the script; rather, it should be the secret motivating force of the actions the characters take. With all this planning, you'll know how to write a script with interesting characters in no time.

What kind of script should you be writing? Is it your goal in life to make others laugh or to make them cry? Would you rather make them scratch their heads for a couple of hours? Before you start writing, you need to decide what your intentions are for the genre of your script. Sure, you can take a risk by writing a funny story that suddenly turns tragic, or a tragic story that suddenly becomes funny, but most audiences appreciate a little bit of consistency. Before you start, decide whether you want a happy or tragic ending. This will prevent you from changing your mind halfway through writing your script.

When it comes to genre, perhaps the most important thing you can do is to read the works of others. You aren't going to learn how to write a script that has the wit of Wilde without reading The Importance of Being Earnest, and it certainly won't attain the greatness of Shakespearean tragedy unless you dive into Hamlet or Macbeth.

Ah, finally, the moment we've all been waiting for—it's time to create your plot! Just as you should come up with your genre before you begin writing, you should also decide your plot before you write your script. Much like the histories you create for your characters, you need to write out a detailed plan for your plot. Map out the important events that need to take place, focusing on creating a beginning, a middle, and an end. This mapping phase is also known as pre-writing. Learning how to prewrite is just as important as learning how to write a script. During the prewriting process, you should also be writing ideas for how to bring your plot to life. Which elements will be shown in action, and which will be depicted through character dialogue? Will your characters perform monologues? It is also essential that you have your ending decided before you begin writing. Your audience should be surprised by the ending of your play—you should not!

Balance between dialogue and action on stage is key. You don't want to bore your audience or readers with huge segments of dialogue, but you also don't want to overwhelm them with confusing action scenes. Make sure that all the stage directions you write in your script are direct and to the point. Unless they are essential to understanding the action, do not include in your stage directions the thoughts or motivations of characters. This balance between action and dialogue can make learning how to write a script particularly challenging, especially because so many writers have been taught to "show, not tell." Ironically, a lot of action in theater is shown by telling.

Bringing your script to life

Phew! You've figured out your characters, planned the plot, and written a great script. But for some reason, something isn't quite right. Your script just hasn't hit the caliber that you were going for. What do you need to do to take your script to the next level? Let's look to our old friends for this one. What's the difference between a script written by Shakespeare, Wilde, or Williams and a script written by you? Plays used to be performed way before they were ever published. Your script is meant to be seen and heard. So get together with some friends and do a read-through. This will help you fix any awkwardness or inconsistency in your script writing. Once you have fixed the performance potential of your script, the readability will follow naturally. If you're still feeling like your script needs a bit of help, let Scribendi.com's script editing professionals give you a hand. We would love to help you perfect the next great theater production.

"Though this be madness, yet there is method in't."—William Shakespeare, Hamlet