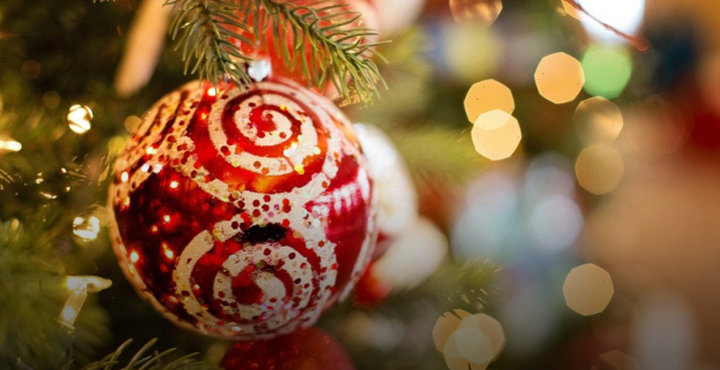 Advent Calendar: A method of counting down the days left until Christmas. Typically, children can lift a flap on each day from December 1 to December 25 to reveal a piece of chocolate.

Bauble: Typically, a small piece of inexpensive jewelry. During the Christmas season, however, it can also refer to Christmas tree ornaments and other decorations.

Caroling: A traditional Christmas pastime in which a group of people go door to door singing Christmas carols (songs).

Chocolate Gelt: Chocolate money that is given to Jewish children during Hanukkah. It often used in the Dreidel game.

Christmas: A Christian holiday held on December 25 celebrating the birth of Christ. It is customary to eat a large meal and give gifts to one another on the holiday.

Dreidel: A small, four-sided spinning top with a Hebrew letter on each side, often used in a game played at Hanukkah.

Eggnog: A traditional Christmas drink that is made from a mixture of eggs, cream, and spices. Alcohol can also be added in some recipes.

Elves: Small creatures that live at the North Pole. They work for Santa, creating toys for the children of the world.

Frankincense: A resin used in incense and perfumes. In the story of Christ's birth, it was one of the three items that were brought to Jesus by the wise men.

Fruitcake: A pastry made with dried fruit and candy, sometimes drenched with alcohol.

Garland: A wreath or banner of leaves and flowers that is used for Christmas decorating.

Ghost of Christmas Past/Present/Future: Characters from the novel A Christmas Carol by Charles Dickens. The ghosts of Christmas Past, Present, and Future are sent to Scrooge to show him the error of his ways and help him see the true meaning of Christmas.

Glad tidings/Good tidings: Happy news or information. The phrase is often used around Christmas, having its origins in the story of Christ's birth when an angel says to the shepherds, "I bring you good tidings of great joy, which shall be to all people."

Grinch: A character in Dr. Seuss' Christmas story, How the Grinch Stole Christmas. It has come to refer to a person who does not like Christmas. (It may also conjure images of a green, hairy Jim Carrey on top of a mountain.)

Hanukkah: A Jewish holiday starting on the 25th day of Kislev, according to the Hebrew calendar, and lasting eight days. It celebrates the rededication of the Holy Temple in Jerusalem. It is also known as Chanukah.

Holly: A shrub typically used in Christmas decorating. (It is also a song by Justin Bieber.)

Jolly: Good-humored and cheerful. This word is often used to describe Santa Claus.

Kwanzaa: A secular festival observed by many African Americans from December 26 to January 1 as a celebration of their cultural heritage and traditional values.

Menorah: A branched candlestick used in Jewish worship, especially one with eight branches and a central socket used at Hanukkah.

Mistletoe: A plant that is typically hung over doorways during the Christmas season. When two people stand under the mistletoe, it is tradition that they kiss.

Noel: The French term for Christmas.

Nutcracker: An efficient tool used to open walnuts. However, the Nutcracker is also an iconic Christmas character from E.T.A. Hoffman's novel, The Nutcracker and the Mouse King. The novel was adapted into a ballet originally choreographed by Petipa and Ivanov and with a score by Tchaikovsky (op. 71), which has become one of the most iconic ballets of all time and closely associated with Christmas.

Partridge: A short-tailed game bird with mainly brown plumage. They are native to Eurasia (and often found in pear trees).

Reindeer: A deer native to arctic and subarctic climates. Santa has a team of flying reindeer that pull his sleigh. Dasher, Dancer, Prancer, Vixen, Comet, Cupid, Donner, and Blitzen are the main team, and Rudolph leads the herd with his glowing red nose. When not working on Christmas Eve, they are known to participate in reindeer games. We also have reason to suspect that a reindeer may have run over an elderly lady.

Santa Claus: The man in a big red suit who delivers presents to children on Christmas Eve night. He has a long white beard and rosy complexion. He is married to Mrs. Claus and lives at the North Pole. He is also known as Kris Kringle, Father Christmas, Saint Nicholas, and Saint Nick.

Scrooge: The protagonist in the novel A Christmas Carol by Charles Dickens. He is a mean, greedy old man who hates Christmas (but realizes its magic by the end of the novel). You may hear someone refer to another person as a Scrooge, implying that that person does not like Christmas or is a cheapskate.

Secret Santa: A method of Christmas gift giving in which members of a group or community are randomly assigned a person to whom they anonymously give a gift.

Seven Symbols of Kwanzaa: Representations of African culture and community. These symbols include kikombe cha umoja (the unity cup), kinara (the candleholder), mazao (fruits, nuts, and vegetables), mishumaa saba (the seven candles), mkeka (the mat), vibunzi (the ear of corn), and zawadi (the gifts).

Sleigh: A large sled pulled over the snow by horses or reindeer.

Stocking: A large sock often hung over a mantel (if available) on Christmas Eve. Santa then fills the stocking with either toys (for nice children) or coal (for naughty children).

Sugarplum: A piece of hard candy that is not necessarily plum flavored but is delicious enough that children are known to dream about them on Christmas Eve.

Tinsel: Shiny, metallic strips of foil that are draped on a Christmas tree. They are intended to look like icicles are on a tree.

Tiny Tim: The sweet, sickly boy from A Christmas Carol by Charles Dickens. His character is depicted as innocent and virtuous, and it is his resilience and kindness that helps warm the heart of the stony and bitter Scrooge. Tiny Tim's most famous quote is, "God bless us, everyone!"

Ugly Christmas Sweater: A garish, out-of-style sweater worn at Christmas. They have risen in popularity in recent years as people started hosting ugly Christmas sweater parties, to which all the guests wear their worst sweater and receive prizes for having the ugliest one.

Winter Solstice: The day that marks the beginning of winter. It is the shortest day of the year.

Yule: An archaic term for Christmas.

Did you know that a group of turtles is called a bale? Find out other quirky collective nouns for animals with this adorable infographic.

Festive Grammar: There's No Gift like the Present Tense

With Christmas approaching, it is time to unwrap one of the most useful gifts you will receive this year: a thorough knowledge of the present tense!