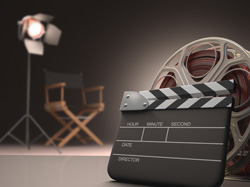 Scribendi.com offers a compilation of great
quotes about script writing from some of the
world's most famous scriptwriters.

Are you a first-time scriptwriter with serious writer's block? We've all been there. Even some of theater and film's most famous playwrights and screenwriters have been stuck with a tricky piece of writing. Luckily enough for you, these scriptwriters discovered ways to find their inspiration and create masterpieces. Here's a look at some great advice they've given to aspiring scriptwriters like yourself.

"Board that story out as if it costs millions of dollars a frame. Because you're always gonna be able to come up with jokes and texture, but it's that story that will kill you if you don't have it."

Tina Fey is a scriptwriter and an actor, but above all, she's a comedian. Fey became popular for both her writing and performances on shows like Saturday Night Live and 30 Rock. She has also written successful films, including the catty-girl classic Mean Girls. She knows what it takes to write a good script: substance. Fey's advice highlights something that Scribendi.com's writers and editors also find incredibly important to the process of writing a script, which is the pre-writing process. If you have a story and characters already created, the rest of the script will come naturally.

"The whole trick is to make it feel like you're spying on real people's lives as they get through the day. When I'm writing, I have to trick myself as a writer. If I consciously say, 'I'm writing,' I feel all this pressure and somehow it doesn't feel as real as when it doesn't seem to count as much."

Scriptwriter, playwright, or screenwriter—it doesn't matter what you call yourself, because writing scripts means being an observer of the human condition. Think of yourself as an observer of animals in their natural habitats. You should pay attention to the ways that people around you speak and behave. When you begin to write your own story, you can draw inspiration from these observations. Think like David O. Russell, writer and director of successful films like The Fighter, Silver Linings Playbook, and American Hustle. You're not merely a scriptwriter, but an observer who must carefully document all that you see.

"A writer should have this little voice inside saying, 'Tell the truth.' Reveal a few secrets."

Writing a story shouldn't just be for others; it should also be for yourself. What's the underlying point of your story? If you ever get stuck, think about why you're writing. What secrets do you, as a scriptwriter, have to tell? How can you choose to tell them? Quentin Tarantino, writer and director of Pulp Fiction, Inglourious Basterds, Django Unchained, and many other popular films, recommends being honest with yourself during the writing process. It can be helpful to write down your thoughts in order to become more aware of the process behind your writing.

"Don't be seduced into thinking that that which does not make a profit is without value."

The rumors are true. Not every script is a best-seller. You won't always experience financial success as a scriptwriter. Quentin Tarantino, David O. Russell, Tina Fey, and Arthur Miller certainly didn't begin their scriptwriting careers on the top. Miller, a successful playwright known for works like All My Sons and Death of a Salesman, makes an important point about success for a scriptwriter. Success, no matter how you measure it, takes time. It's also critical to get professional, objective feedback like the kind that Scribendi.com's script editing service provides. Always remember that every script you write is a building block to something bigger and better. Experience as a writer is invaluable; the more you write, the better you'll become. And, most importantly, remember: if it's important to you, it is important.